Nitrogen fixation, the process by which nitrogen is converted to ammonia, is vital for plants to survive and grow. However, only a very small number of plants, most notably legumes (such as peas, beans and lentils) have the ability to fix nitrogen from the atmosphere with the help of nitrogen fixing bacteria. The vast majority of plants have to obtain nitrogen from the soil, and for most crops currently being grown across the world, this also means a reliance on synthetic nitrogen fertiliser. 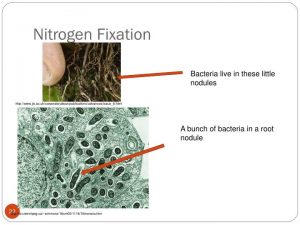 Professor Edward Cocking, Director of The University of Nottingham’s Centre for Crop Nitrogen Fixation, has developed a unique method of putting nitrogen-fixing bacteria into the cells of plant roots. His major breakthrough came when he found a specific strain of nitrogen-fixing bacteria in sugar-cane which he discovered could intracellularly colonise all major crop plants. This ground-breaking development potentially provides every cell in the plant with the ability to fix atmospheric nitrogen. The implications for agriculture are enormous as this new technology can provide much of the plant’s nitrogen needs.

A leading world expert in nitrogen and plant science, Professor Cocking has long recognised that there is a critical need to reduce nitrogen pollution caused by nitrogen based fertilisers. Nitrate pollution is a major problem as is also the pollution of the atmosphere by ammonia and oxides of nitrogen.

In addition, nitrate pollution is a health hazard and also causes oxygen-depleted ‘dead zones’ in our waterways and oceans. A recent study estimates that that the annual cost of damage caused by nitrogen pollution across Europe is £60 billion — £280 billion a year.

Speaking about the technology, which is known as ‘N-Fix’, Professor Cocking said: “Helping plants to naturally obtain the nitrogen they need is a key aspect of World Food Security. The world needs to unhook itself from its ever increasing reliance on synthetic nitrogen fertilisers produced from fossil fuels with its high economic costs, its pollution of the environment and its high energy costs.” N-Fix is neither genetic modification nor bio-engineering. It is a naturally occurring nitrogen fixing bacteria which takes up and uses nitrogen from the air. Applied to the cells of plants (intra-cellular) via the seed, it provides every cell in the plant with the ability to fix nitrogen. Plant seeds are coated with these bacteria in order to create a symbiotic, mutually beneficial relationship and naturally produce nitrogen.

N-Fix is a natural nitrogen seed coating that provides a sustainable solution to fertiliser overuse and Nitrogen pollution. It is environmentally friendly and can be applied to all crops. Over the last 10 years, The University of Nottingham has conducted a series of extensive research programmes which have established proof of principal of the technology in the laboratory, growth rooms and glasshouses.

The University of Nottingham’s Plant and Crop Sciences Division is internationally acclaimed as a centre for fundamental and applied research, underpinning its understanding of agriculture, food production and quality, and the natural environment. It also has one of the largest communities of plant scientists in the UK.

Dr Susan Huxtable, Director of Intellectual Property Commercialisation at The University of Nottingham, believes that the N-Fix technology has significant implications for agriculture, she said: “There is a substantial global market for the N-Fix technology, as it can be applied globally to all crops. N-Fix has the power to transform agriculture, while at the same time offering a significant cost benefit to the grower through the savings that they will make in the reduced costs of fertilisers. It is a great example of how University research can have a world-changing impact.” The N-Fix technology has been licensed by The University of Nottingham to Azotic Technologies Ltd to develop and commercialise N-Fix globally on its behalf for all crop species.

Peter Blezard, CEO of Azotic Technologies added: “Agriculture has to change and N-Fix can make a real and positive contribution to that change. It has enormous potential to help feed more people in many of the poorer parts of the world, while at the same time, dramatically reducing the amount of synthetic nitrogen produced in the world.”

The proof of concept has already been demonstrated. The uptake and fixation of nitrogen in a range of crop species has been proven to work in the laboratory and Azotic is now working on field trials in order to produce robust efficacy data. This will be followed by seeking regulatory approval for N-Fix initially in the UK, Europe, USA, Canada and Brazil, with more countries to follow.

It is anticipated that the N-Fix technology will be commercially available within the next two to three years.